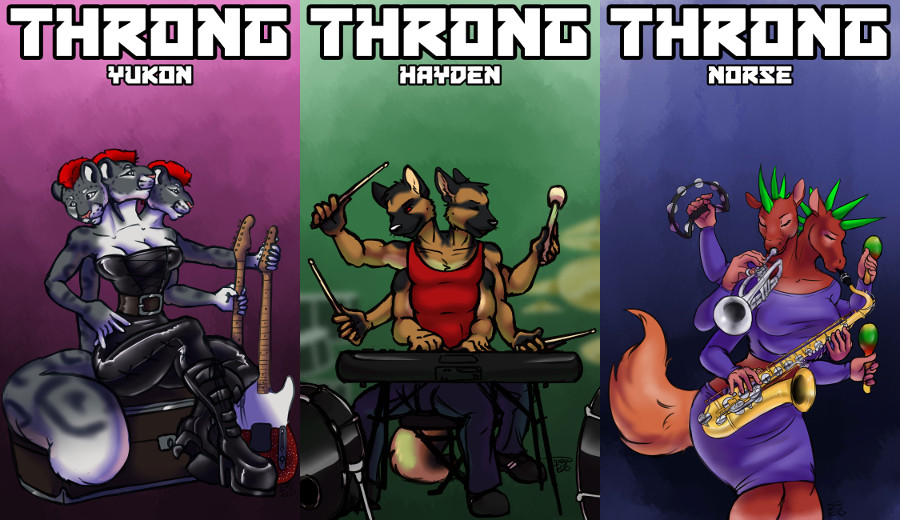 Some say she's the result of a fling of a drunk god up in Canada. Other says she's the product of a mad rock scientist. All we know, she's called Yukon.

This femme cerberus snow leopard comes in from the cold to command bass and guitar on her Double Startocaster. Each six-finger hand masters the rifts in each song. She also does female vocals.

Some rumors have it he's the son of the notable Cerberus. Others mention that he's the product of Dr. Pinkerton III. All we know is, his name is Hayden.

This nine-limbed German Shepard will give you epic beats and backing sounds like no other. This music madman is also a fully licensed medical doctor, bioenginering bodies just like engineering music! He sings male vocals.

This Icelandic Viking horse has the voice and range of the gods, covering everything and anything. With expert breath control, some say nobody could wind her... until that one tour...

They whisper as to how unusual shi is, how shi carries hirself like nothing, and yet they marvel at hir voices. All we know is, hir name is Vox.

Vox is a throughly triplicated cougar (puma/mountain lion) who joined the band during the "Going Station to Station" tour (after one of our famous back-stage "events"). Hir triple-voice range rivals that of Norse! Shi plays synth keyboard, slowly expanding into other instruments. (Pic soon!)

The Staff behind the Band
Band "Facts"

Throng's tailor is a well kept secret. The only thing known is that he/she/shi is well paid.

Throng is based out of Metroburg, CA and the band site is hosted there. The fan site is hosted in Baltimore, MD and managed by college students in College Park, MD.

Throng will never play for a presidential canidate, namely because one tried to slander the band. Elder sued... and won. The canidate (who became President) is now legally required to support multifur rights... and strangely enough mass transit.

Some say Norse really wrote "Constantinople, Not Instanbul" and They Might Be Giants parodied it.

The only way to ask Norse hir age is to have DAMN GOOD coffee on hand... or at least Hayden around if it's Starbucks.

Norse's spiked mane was done by Yukon on a bet. Norse lost the bet, but kept the hair style.

The color used on Norse's spiked mane is supposedly called "Irish Green". This has caused much "debate" on Throng's unoffical fan forums to Norse's amusement.

Some wonder what Norse's lung capacity is. Those who have dated Norse say "Too much."

Throng's unofficial fan forum has a dedicated section for Norse's ex relationships. This one guy on it though must be on drugs, because he claims he's a viking.

Yukon keeps an eye on the radiation levels of certian places. For reasons.

Yukon's purr is known to double as bass.

Yukon's Double Stratocaster is not her first one, nor is it her only one.

Yukon, before forming Throng, was part of a Jimmy Hendrix tribute band. It disbanded when she destroyed and set fire to a Gibson guitar that refused to tune properly... on stage. The resulting video required Google to double Youtube's servers overnight.

Haden can count on all hands the number of doctors that wanted to remove his middle leg.

Hayden owns stock in genetic research firms. This lead him to be who he is today... very rich outside the band.

Hayden researches coffee shops on the road, for one reason. Norse.

Some say Killer got hir name by eating an attacker whole with hir tail. The truth is in a sealed court document that only Elder can touch.

Mussi was found collapsed backstage by Killer, Coils, and Hauler on an overseas tour. Archer was able locate her true identity... which is a tale too sorid to tell... at this time.

Mussi was male. Was. An experimental regeneration treatment had a "bug" in it. Hayden calls it a feature that made him a lot of money in the stock market. Ether way, both Mussi and Hayden are happy about it.

Mussi is technically home-schooled... and adopted by Norse and Hauler.

Scout maintains a blacklist of venues that do NOT like multifurs. Non-multifurs have been known to check the list for other bands and demand venue changes.

On the other hand, Scout maintains a list of late-night restaurants with links to Zagat's pages on them. The good ones. Which get heavily tipped.

Scout also maintains a list of hotels who are also multifur friendly. Strangely enough, they tend to sell out faster during concert nights.

Hayden and Norse used to get the coffee. Hauler does this now, after having to "put the two back in their place" after one too many arguments at too many Starbucks.

Mint also was male. Was. She actually just paid off the loan for the treatment... by finding out who actually denied her initial financing.

Elder gets sick of "sticking your neck out" jokes real quick.